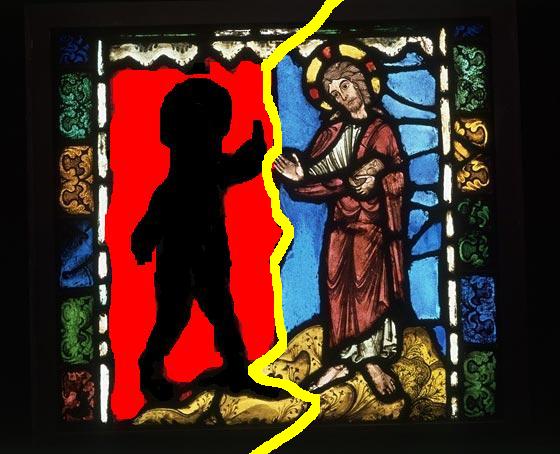 20 years ago, when I was 8 years old, my atheistic family made contact with so-called poltergeists. They described themselves as extraterrestrial spirits from different planets in other solar systems.

At the beginning there was only one, who would write by my sister’s hand. Later there were many – dozens or even hundreds. Each one of them had its unique handwriting. Later they began communicating with us also by my mother’s hand and even by my sister’s voice. They began knocking or scratching on the walls and furniture, speaking through inner voices within us or sending visions, as well as communicating in other ways. Through their actions we sometimes had the ability to stick things to us (like pens and sometimes heavier objects), without natural power to hold them. We once demonstrated this to our relatives, and everyone in the room – about 10 people, became able to do it.

The poltergeists told us that they would be very helpful to us and would not make mischief if we didn’t tell anyone about them. We were keeping the deal and it really seemed that they were helping us. I took two school years in the time of one (my third and fourth year) and at once I began writing very good poems and fairy tales, like an assembly line – usually about two per day. My sister, who was 13 years old, wrote a novel of 180 typed pages A4. One of the beings predicted that she would soon become an artist, though we could not see any special talent in this area. At once she began making amazing pictures in advanced styles (mainly surrealism). Her pictures had very small and complicated details, which she would make very quickly and easily.

The poltergeists told us that this was only the beginning. They told us that they had a special mission for my sister and some other teens from different countries. They were chosen to go to a certain castle in London, helped by extraterrestrials from the most developed planet, where they were to create revolutionary new inventions. Later on I saw a documentary, in which that castle really exists in East London. It was abandoned and it was believed that ghosts of dead people lived there. Experimentally for the movie one couple spent a night in the castle. They were hearing voices during the night and were seeing some furniture and other objects move in their room.

It seemed that the good deeds from our invisible friends didn’t go any further. Without any logical reason, the environment in our house became very nervous. After several frightening night visions, we all began sleeping with the lights on. We became very nervous and often shouted to each other. Again without a reason, my parents realized that they had one common wish – to commit suicide. They didn’t do it only because of their responsibility as parents, but it was not clear how long they would be able to resist. My young mind was not able to bear anymore the pressure of the schedule that the extraterrestrials required from me (including a heavy diet). Therefore I just stopped doing what they wanted me to do. They became very dissatisfied and then decided to tell me what glorious plans they had for me, but even this was not able to motivate me anymore. Fortunately, a sudden change didn’t give them the time for such attempts.

One evening my father came home, in an impossible condition for that time – smiley and happy. Then he made the most absurd statement for our home: “I’ve become a Christian.” We were all shocked and interested in what had happened.

That day, on a bus, he heard a conversation between a boy and a girl who were talking about God. As a psychologist, he tried to interfere to correct their illusions, but the girl invited him to her evangelical church. A strong feeling of wrath pushed him to try and understand what happens at this place and he attended the service that evening. During the service, he began feeling great joy and inner peace. He realized that no one from the assembly was influencing his emotions. The experience was so powerful that it subdued the explanation given to us by the poltergeists about the non-material world, which excluded any deity.

Our astonishment made us go and see the church with our own eyes. The illogical phenomena began again. We arrived at the church early and my sister began talking with the young people there. After the conversation with them, even before the service, she also began telling us that she already believed in God. Later that night, again without a logical reason, my mother also began claiming it. Then I was sure that I remained the only one from our family that was not crazy. All the others behaved like we had never had poltergeists at home.

On the next day the time came for facing the real collision between the poltergeists and the One who began turning us to Himself.

When we attempted to ask the poltergeists what they thought about the conversion of three of us to Christianity, God himself interfered in the conversation and they were forced to recognize they were the evil spirits described in the Bible. On the notebook we used for conversations with them through my sister’s hand, a different power took the pen and made a separating line. Then the hand drew a nice human face, which my mother recognized as the image of Jesus Christ. Below the image the same Power wrote: “I am with you, my children!” Later we learned that in the Bible Jesus says in Matthew 28:20: “I am with you always, to the very end of the age.”

After this moment nothing tried to write through my sister or my mother’s hands. This was the night when I also accepted God. But the battle for our souls was not over.

The first three days after the events I was not able to sleep because of fear and nightmares. My sister continued to hear voices, which then we knew were from the Devil. But our family began to gather every night for prayers. On the third night after our conversion, my mother began praying for each one of us to be set free of the evil spirits that disturbed us. When she began praying for me, I felt that some force pushed me down on the sofa and something went out of me. Immediately I felt free. So did the others. After that night there has never been a presence of those evil spirits and we began living as Christians, as we still are now, 20 years later.